One unexpected thing that had a big influence on me in terms of feeling support from others was a jigsaw puzzle in the oncological radiology’s waiting room. It was a large puzzle with a lot of pieces. Every day for six weeks, as I received radiation treatment, I saw that puzzle in various stages of progress. Eventually, I started poking around at it, and often I would be able to add a piece or two. The next day I came, more would have been completed — seems like a lot of us were poking!

This served as a lovely metaphor for what we, as patients, were going through: cancer is a puzzle, and treatment offers pieces that we put together in hope of finding our way through. All of us were working on this jigsaw puzzle at different levels of ability. Some were stronger than others, some had better support networks, but everyone was shuffling along at their own pace, completing their treatment puzzle, piece by piece, day by day. On days when treatment seemed never-ending, there was gratification to be found in the progress of the jigsaw puzzle.

I had never realized that working on jigsaw puzzles was so soothing. Just as in mindfulness meditation where you focus on the breath, the puzzle offers an opportunity to focus on a particular pattern, color or shape of a piece. It requires concentration, but this concentration comes easily. You don’t have to make yourself focus, it simply happens as you search for a piece.

Eventually, my radiation treatment ended and I left a partially completed puzzle in that cozy waiting room for others to finish, but I longed for that familiar feeling of comfort and quiet. That waiting room had been an inviting sanctuary where my only responsibility was to practice self-care. I wanted that to continue. It wasn’t long before I’d found puzzles to work on at home. I chose the images for how they made me feel, and for quite a few months afterwards, working on puzzles was a meditation. My family played the role of other patients, and together we enjoyed the satisfaction of putting the pieces together.

Here are several of the puzzles I/we finished at home. Apologies again: as with most other photos in this blog, I never intended to post these online, so the photo quality is lacking. I’ve added info on where these puzzles can be found in case anyone is interested, especially if you’d like to see what the pictures look like under ideal conditions.

“Secret Garden” by Alan Giana (Bits & Pieces, 500 pcs, Amazon.com): I was looking for a peaceful oasis and this image fit the bill. I loved the flowers and flying creatures, but particularly the koi, which brought a special zen to the picture. (Bad lighting – doesn’t do it justice!) 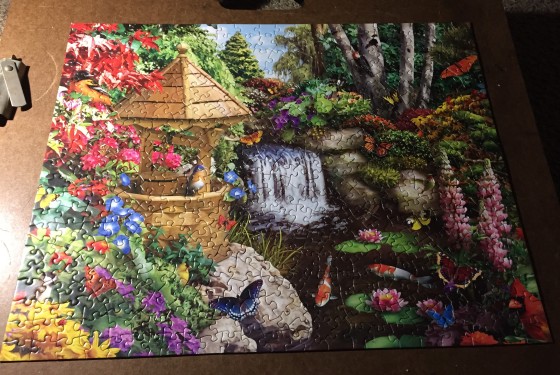 “Marvelous Garden” by Oleg Gavrilov (Bits & Pieces, 500 pcs, Amazon.com): I love peacock blue, the architecture smacked of Tuscanny and the flowers (yes, pink ones) completed the scene. This remains my favorite puzzle to date.

“Autumn Oasis II” by Alan Giana (Bits & Pieces, 500 pcs, Amazon.com): Autumn means that Halloween/Thanksgiving/Christmas are coming up soon, and after such a miserable year of fear and cancer treatments, I was so looking forward to a joyous holiday season. 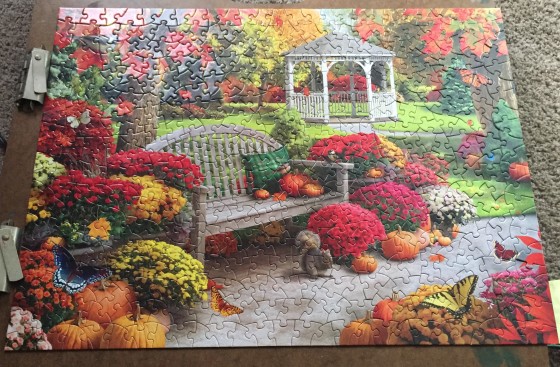 “Florence” by Eric Dowdle (Dowdle Puzzles, 500 pcs, dowdlefolkart.com but purchased at Costco): I missed visiting Florence during a European trip due to scheduling conflicts, but it remains one of my most-wanted cities to tour. Seeing Michelangelo’s David in person is on my bucket list! I particularly liked that this puzzle came with a little poster of the image that made putting it together a serene pleasure. The last thing you want is to get headache trying to match up teeny windows! 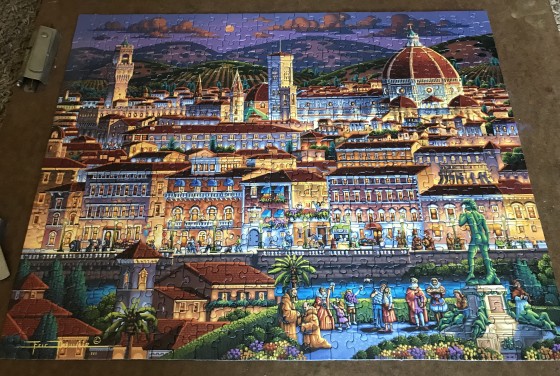